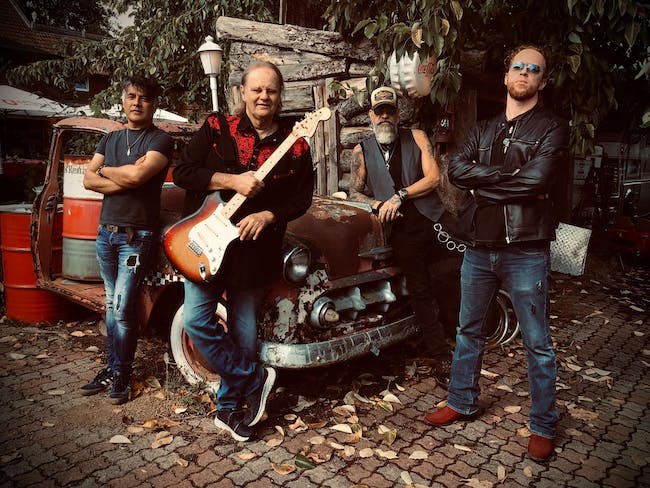 However fast or far a man travels, he can never truly outrun his past. Walter Trout knows this better than anyone. As he embarked on his 30th solo album, Ride, the iconic US blues-rock guitarist found himself eyeing the horizon and the green shoots of his triumphant late career. There was a new record deal with Mascot/Provogue. A move from California to Denmark with his beloved family. Even now, aged 70, Trout was still writing fresh chapters of his life story.

No doubt, Ride has a charging momentum and a modern energy, with Trout broadening his musical palette and taking the pulse of an era reeling from both pandemic and politicos. And yet, when the veteran songwriter reached for guitar and notepad, he found himself walking once again amongst the good, bad and ugly scenes of his extraordinary backstory.

“This album is a snapshot of how I was feeling through this pandemic,” he says. “I think I still have something new to say about the world, and that’s important to me. But my life has been one hell of a ride, and when I listened back, I realised there were a lot of songs about dealing with the past.”

The last time we saw Trout stepping out, he was on the road in support of 2020’s Ordinary Madness: a universally acclaimed album that debuted at #2 on the Billboard Blues Chart.

Yet the campaign ended in frustration, when Covid rendered live work too dangerous, both for this liver-transplant survivor and his fans, condemning Trout to an enforced downtime in Denmark that he hadn’t known in a half-century. “I’ve been at this since ’69, when I started out in the New Jersey bars,” he reflects. “Suddenly, I’m sat on my ass for sixteen months, although I did still practise guitar every day. My wife and manager Marie knew I needed to make music. So her present to me for my 70th birthday was a brand-new record deal she had negotiated. My producer, Eric Corne, scoped out a new studio in LA, and my plan was to fly home to make a new album in May.”

Arriving on the US West Coast two weeks before sessions began, Trout settled to write the Ride material in his now-deserted house in Huntington Beach, California. But even in this beachside paradise, amongst the swaying palms and ocean breeze, the past came calling. As long-standing Trout fans know, the Golden State has been the bluesman’s home for 47 years, since the fateful day in ’74 when he quit his New Jersey band, packed his worldly possessions into a Volkswagen Beetle and drove coast-to-coast in search of fortune and glory.

In time, Trout would find both, joining John Mayall’s mythologised Bluesbreakers lineup in ’85, before embarking on an acclaimed solo career from ’89 onwards. But before that came his chaotic, self-destructive years as a jobbing lead guitarist, whether for revered-but-tricky blues pioneers like John Lee Hooker and Big Mama Thornton, or an unhinged tenure in an ’80s Canned Heat lineup controlled by the Hell’s Angels.

Trout’s well-documented excess in this era was darker than a young rock star cutting loose. It could all be traced back to his troubled childhood in New Jersey, he explains, where an unstable stepfather – himself the victim of shocking cruelty as a prisoner of war – was a terrifying presence. As Ride took form, such memories couldn’t help but flavour the music. “This album is obviously what I was going through mentally and emotionally,” he considers. “All I did was express it. I spent a lot of time crying, because I would dig down into my emotional core. I want my songs to have some sort of truth to them.”

In May, the Trout band convened at Kingsize Soundlabs, with Corne marshalling a studio lineup that comprised long-standing drummer Michael Leasure, regular keys man Teddy ‘Zig Zag’ Andreadis and incoming bassist Jamie Hunting (deputising for Johnny Griparic, laid low in Sweden with an ear infection). “No star cameos,” Trout nods. “Strictly me and my band. The only guest was my tour manager, Anthony Grisham, who plays rhythm guitar on Leave It All Behind. The reason being, I have to do everything with three fingers because of my broken pinkie. And to play a Chuck Berry rhythm, you need your pinkie. We were all in the studio in masks, and everybody had to be vaccinated and tested.”

In years gone by, the Kingsize studios had been the location for both the Blues For The Modern Daze (2012) and Luther’s Blues (2013) albums. But from the grinding riff and freight-train harp that light the fuse of opener Ghosts, it’s clear Ride is like nothing else in Trout’s catalogue. “That song was actually written as a poem,” he explains. “It starts off with the lyric, ‘Sometimes I hear a familiar song and it brings back memories’. That’s the truth. I’ll be riding in my car, a song comes on the radio and I have to pull over and sob for a while. Ghosts sums this album up, y’know?”

Some memories that Trout examines on Ride are long-distant but eternally poignant. Try the deceptively upbeat title track, another song that began as a poem, recounting the locomotive that rattled past his childhood home each night and enticed him to freight-hop to freedom. “That song is about what it felt like to lay there in bed and dream about escaping on that train.”

The stormy Hey Mama takes inspiration from the same period, with Trout debating whether his trauma could have been averted. “I’m not pissed off with my mom and I love her memory,” he says, “but my wife says, ‘Your mom probably could have done more to protect you from your stepdad’. Yeah, maybe she could have. But it’s easy to say that looking back.”

Other songs are more recent and raw, like the slow-burn wee-small-hours lament Follow You Back Home, which channels Trout’s anguish during a period of marital difficulty. “I was living in a hotel down the street while my wife and family were living five blocks away. It was really rough, and with that song, I put myself back in that hotel room. That lyric is about as deep as I can get, and the guitar is about as emotional as I can play. That’s the first time I’ve ever used a real string section, by the way.”

Yet Trout’s ruminations are not always negative. Reverb-cloaked, faintly Hendrixian and vocally influenced by Chet Baker, the stunning album closer Destiny gives an unvarnished account of the guitarist’s first meeting with Marie at a Danish blues festival in 1990. Meanwhile, decorated by a country-rock solo almost unique in Trout’s catalogue, The Fertile Soil namechecks the ninth-grade band who let the young guitarist sit in despite his fledgling chops. “I was thinking about those early days back in Jersey and those dear friends of mine who are gone now. That song is a metaphor. Back then, when we were all fifteen, everything was ahead of us and our life was the fertile soil.”

Other cuts on the Ride tracklisting chronicle the here-and-now. Take the roistering High Is Low, whose lyrics – the latest songwriting contribution from Marie – skewer an age in which “social media lies are rampant and the grip on reality keeps slipping”. Elsewhere, while the brittle blues of So Many Sad Goodbyes was born after a news report announcing the grim milestone of 400,000 US Covid deaths, Waiting For The Dawn and Better Days Ahead find Trout urging us – and himself – to stay strong.

“I listened to Better Days Ahead yesterday,” he says, “and I had a realisation that I was actually writing those words to myself. There were times in this pandemic where I have sunk into some pretty deep depressions, sitting around, wondering whether life has a point. With that song, I’m trying to convince myself to get through this.”

Yet there is always light. Even when Trout tells us ‘I worry too much’ in the spring-heeled funk-blues of the same name – about politics, about the future, about his health – he offsets any existential dread with a groove that demands dancing. “I kinda lightened the original lyrics up, with the line about worrying about my liver. But it’s true: some guys get liver transplants and they last two years. Gregg Allman got a liver transplant, he only lasted three years. And I’m on seven years. So, y’know, I wonder how long I got here.”

Meanwhile, in an era where light relief is vanishingly scarce, Leave It All Behind is a flash of pure escapism. “That song is just like, ‘Let’s get the fuck out of here, baby’,” Trout laughs. “That one was actually a lot of fun to write. I just wanted to write an old ’50s song. It’s another ‘let’s escape’ song, almost the same theme as the title track. I think you’ll find a few of those themes on this album. Like, I want to get away from this, find some sanity and peace of mind through all of this shit that we’re going through.”

By now, Trout knows that nobody ever really leaves their old selves behind. But with Ride providing an emotional release-valve – both for its creator and his loyal listeners – perhaps this veteran artist can reconcile with his past, accept his future and live in the present as it unfolds. “I think you can interpret this album title a few different ways,” he concludes. “I mean, this album is definitely a musical ride and I certainly tried to cover a lot of ground. But, really, life is kind of a ride too, isn’t it? And I want to live mine to the fullest.”