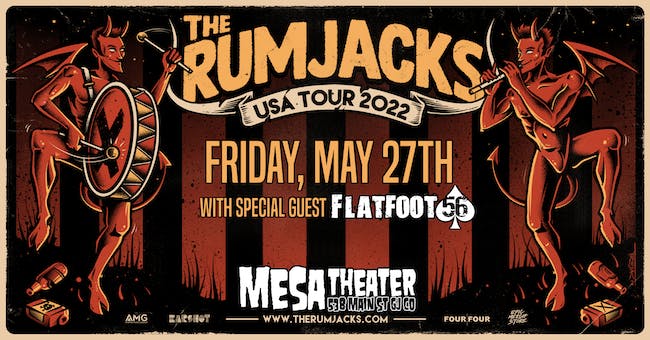 For The Rumjacks; the enforced global shutdown has presented the opportunity for a new begin-

ning, announcing the arrival of Mike Rivkees who will be taking over as lead vocalist. Mike through

his previous work has already developed a reputation as a one of the most charismatic, fun and

honest frontman in the scene. With his numerous musical influences from; Ska and Hardcore,

through to a mix of traditional folk music, Mike’s voice and songs compliment The Rumjacks di-

Hailing from the streets of Sydney Australia, The Rumjacks have been described as a mix between

seminal bands The Clash and The Pogues; and, with their energetic live shows they have since

departed the Sydney pub scene and are relgulars on the European circuit, 2019 saw them playing

2019 Also seen massive sold out club shows through out all of France, Romania, Germany and

Hestia, the fifth studio album from The Rumjacks, marks a new era for the band.

Hestia takes the energy of traditional folk music, lights it on fire, then sprinkles it with ash. Dark,

gritty, and historically aware, this is music grounded in the character of the Rebel.

When writing Hestia (named after the Greek goddess of home and hearth), bandmembers Mike

perspectives to create a new, globalized iteration of the Celtic punk legacy dating back to The

Pogues, with the punk, ska, and hard rock sounds pulsing through their veins.

The album was recorded under strict Covid-conditions in Milan, Italy where the band stayed and

created this new album through August, September and October 2020.

For twelve years, The Rumjacks have written songs that you cannot help but start singing by the

second chorus, even if you have never heard them before.

In this short career, they have released four acclaimed studio albums and two live albums that cap-

ture their most renowned asset: their electric energy onstage. That organic energy has garnered

them a far-reaching fanbase.