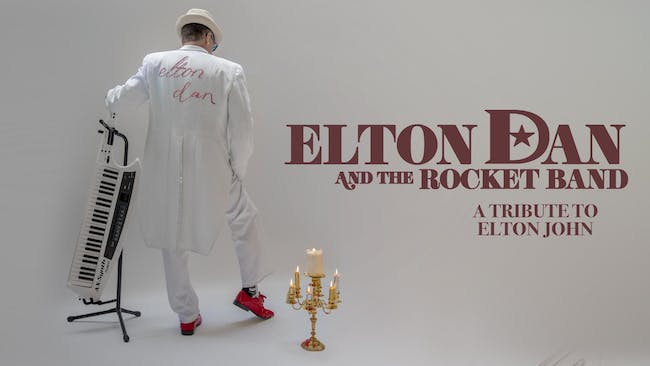 An Elton Dan show pays tribute to one of the all-time greatest artists ever: ELTON JOHN. Elton Dan’s rapport and stage presence is second to none and his magical piano playing has a way of engaging you in the full ELTON experience. Before you know it, you’re captivated by his incredible band including backup singers, and thrilled with the over the top costumes and high energy performances just like ELTON in days past. Elton Dan has performed for gatherings of 8,000 plus but gives each listener the feeling that they are sharing the intimate emotions of the much loved music with just them. For more information, check out Elton Dan on Facebook.

Dan is the lead singer of Elton Dan & the Rocket Band. He has been playing the piano since he was 10 years old. His first concert he attended was the Orange County Symphony, but the concert that made an impression on him was seeing Elton John live at Caesar’s Palace and seeing Paul McCartney at Arrow Head Stadium. From childhood, Dan’s hero in music was Elton John for both the wonderful music he made and the humanitarian contributions the band honored. Dan has persisted in keeping the same traditions in the band he created to honor his music hero Elton John and the legacy and culture of what the Elton John Band stands for.

Today, Elton Dan and the Rocket Band play songs for 7 of the Elton John Albums, including crowd favorites “Amorrena”, “Funeral for a Friend”, “Bennie and the Jets”, “Bitch is Back”, “Sweet Painted Lady”, “Pinball Wizard”, “Goodbye Yellow Brick Road”, and “Levon”. Dan has seen Elton John in concert 8 times to honor the rock legend.

Dan’s hobbies include watching his favorite Soccer team, Manchester United, sipping on his favorite cocktail, an Old Fashion, Traveling, his Trio, Fine Wine, and Salt Water Fishing. The keyboard used by Elton Dan and the Rocket Band is the Nord EX2 Stage Piano.